Post stories from past authors here. Remember to give credit where credit is due!

This happened during my early teen years. Ted lived across the street from me. We were good friends and played a lot of cops and robbers as well as cowboy and indian games. We usually tied up the one who got captured. We were not very good at tying each other up. We almost always managed to escape.

Tina and Diana were sisters that were our age and lived 2 houses down the street from us. They had observed Ted and I playing our games.

When we tired of our games or had nothing better to do we played card games with Tina and Diana. One of those muggy summer rainy days we were playing rook on Tina and Diana's porch. Their parents were gone for the day.

Tina said, "Diana and I have noticed that you and Ted often tie each other up. You always seem to escape. I bet we can tie you in a way that you can't escape."

Since we had rarely been tied in a way that we could escape, Ted and I fancied ourselves as Houdini type escape artists.

Ted and I both, at the same time said, "No girl can tie us up in a way that we can't escape."

Tina and Diana said, in unison, "We know we can tie you up in a way you can't get loose. We dare you to let us get you bound with rope."

We talked a little more and discussed the rules. The 2 girls would tie us with rope. Then we would have an hour to prove we could escape.

Tina and Dina said, "Fine! We can't wait to get you helpless. Lets go to the garage. We have lots of rope there. Dad stores the rope we use for camping trips. He also has a lot of old clothesline there. We can cut that up and use it to make you helpless."

We went down the stairs to the walkout basement and into the attached garage. Tina stopped on the way to get a knife with which to cut the rope into the lengths they would use.

Once in the garage they pulled out a box. It was filled with cotton clothes line. It was the kind that was manufactured before they began using synthetics. The cord was soft and pliable.

Tina and Diana pulled out lengths of rope and sorted them into piles according to length. This should have made us suspicious. The 2 girls rolled an old carpet on the floor.

Once all was ready, Tina said, "I'll tie you and Diana will tie Ted. Sit on the floor so we can get started. We cant wait to see if we can really fix you so you can't escape."

I figured that Tina would just tie my wrists and then see if I could get free. I couldn't have been more wrong.

Tina took a length of rope and draped it around the back of my neck. She brought the long ends back under my arm pits and doubled it. Then she knotted the rope tightly with the knot on my chest.

Next she took a long rope and wrapped it snugly about my chest and upper arms. She knotted this rope on my chest as well.

She then took two shorter lengths of rope and passed them over and under the rope securing my arms to the sides of my body. She had to work to do this. She pulled the loops tight cinching my upper arms to my body and tied them off. My upper arms were now welded to my body with no possible movement.

Tina asked me if I was comfortable. I replied I was. She told me, "Now it's time to do your wrists. Place your arms behind your back in way that your forearms make a right angle with your spine."

I could quite get my forearms parallel to the ground. Tina told me that was all right. She would push them in place.

Tina pushed my arms up a little higher on my back. This make my upper arms be bound even more tightly. I felt tina wrap several loops of rope around my wrists. Then I felt the wrist ropes become even tighter as Tina cinched them.

I began to worry. When Ted and I played our games we had never cinched the ropes. For the first time I began to wonder if escape would be possible. I looked over at Ted and saw that Diana was fixing him in the exact same manner.

Now there was no knot that my prying fingers could reach. I began to realize that I probably would not be getting out of Tina's tie.

I looked over at Ted and saw the puzzled look on his face. With more bravado than I felt, I said, "Don't worry Ted, will be free in no time."

I figured that once they had our arms secured the girls would finish tying us. Again I had a total mis conception of what they had in store for us.

Tina Said, "Lie down so I can do your legs."

I said, come on isn't this enough?"

"She said, "No! we want to be sure you're really tied and helpless. We've just started. Now you can either do as we say or we can leave you there until you are more obedient. We know you have very little chance to escape. We've always wanted to see how helpless wee could get a boy. Now that we have the chance we're going to take full advantage of it. Lie on your stomach."

We had no choice but to obey. Tina bent my left leg double. She wrapped many loops of rope tightly around my ankle and just below my crotch. She force my leg to bend as far as it could. She then cinched those loops and knotted the cord. My hell was almost touching my ass cheeks. Quickly my right leg suffered the same fate.

Tina then roped my ankles tightly together and cinched them.

She stood back eyeing me like a captor surveying his prixe. She said, "Almost done."

I thought, "Gad, I can barely move. What else can she do?" I was soon to find out

I looked over at Ted and saw that he was in the same position as I. Our looks told each other we were going to be there for as long as Tina and Diana desired.

Next Tina took a long rope and and looped around the cinched rope tying my ankles together. she brought both ends of the rope up and passed them around the rope at the back of my neck. She brought the ends down and round the ropes cinching my wrists together. She pulled as hard as she could on the ends of the rope forcing my hands up even higher on my back. When she was satisfied that it was tight enough, she knotted the rope at the back of my neck. My body was now bowed back and I was tightly hog tied. As was Ted.

Tina now took a very long rope. I asked her what she was going to to do with it. She simply replied, "You'll see."

The girls got out one of these short step ladders. They placed the long rope in way that it was looped around the rope connecting my neck wrists and ankles. They threw both ends of this rope over the garage rafter immediately above me. They both pulled on it forcing my body up off the floor a little and tied it off to a hook in the wall. Quickly they did the same to Ted.

Diana said, "Now as to the rules. You boys have an hour to get out of your ropes. "Beware, if you don't escape you will pay a penalty. We're going go to the game room and watch TV. It will be boring watching you struggle to escape. Of course we know you can't do that. Have fun."

With that they left us there in our ropes.

I tired to struggle and see if I could get loose. I tried everything. I could barely move a muscle, much less get any leverage to free loosen a rope. After awhile I was exhausted and could just lie there and hurt. Ted and I were too tired to even talk.

After what seemed like an eternity, Tina and Diana returned.

They said, "It's just like we thought, you're still helpless. I know we didn't discuss it. Now you have to pay for not being able to escape."

We both protested and refused to open our mouths to accept the gag. It was all to no avail the girls simply pinched our nostrils closed. When we opened our mouths to breathe, a ball of cloth was stuffed in them. It was then tied in place with more cloth wrapped around our heads.

We were soon blindfolded.

Then the girls told us they were going for pizza. They indicated they might free us when they got back.

We had not been there as long as they had left us the first time.

The girls came in and released us. They told us they had ordered pizza and that as soon as we were untied we could eat.

After the ropes were removed it took Ted and I quite awhile before we could move our stiff limbs.

While we were eating the pizza and drinking soft drinks, Tina and Diana told us they had practiced on each other with the idea of getting us helpless. They perfected this technique by reading about bondage on the web.

They also said, sometime they would give us a chance to get even. If we wished they had other ideas to practice on us.

Our bondage games became regular events until we developed other interests and moved on in life. 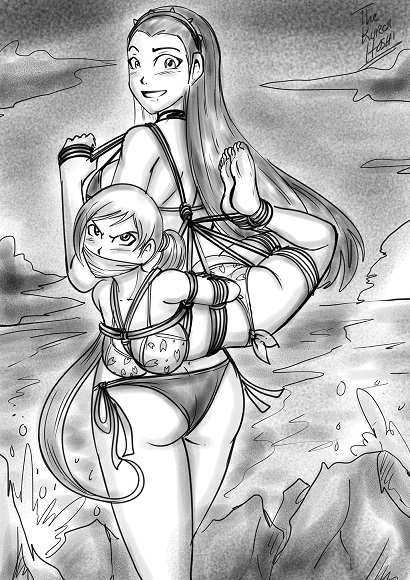 This is a great story. The frame of the story is very nice and also the bondage, although I prefer it when the legs are tied parallel : )
Top
Post Reply Previous topicNext topic
2 posts • Page 1 of 1