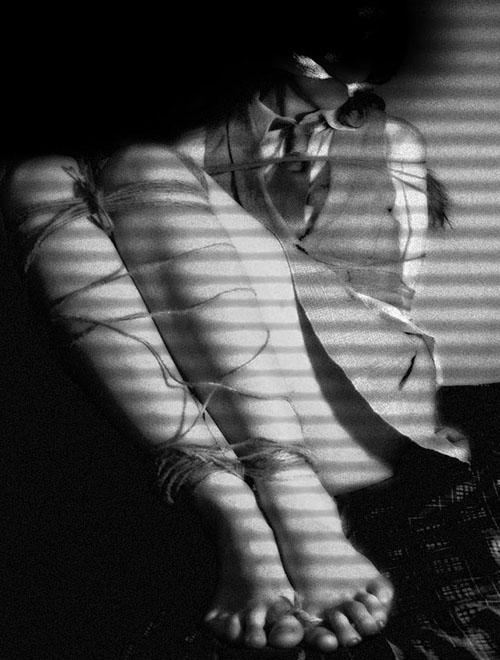 By 10digits
taken from a long since defunct forum: URL Women bound by youth (link wont work, i just posted it for reference purposes)
(it didn't have a title, so I made one up. separated it into paragraphs to make it more readable)

" My 21 year old sister had just gotten married and her husband worked third shift. She did not like being by herself, so from time to time I would stay with her and she would let me play my foot fetish games. This time I planned early and since it was winter I had plenty of pockets to stuff my “toys” into. We started the night watching TV, then she went and took her shower. I started getting my things laid out and ready for the right moment. After her shower she put on her pajamas and ankle socks and came and laid on the bed on her stomach. She knew I loved playing with her feet so she put them in my lap and started digging her toes into my stomach. I would brush the bottoms of her feet with my finger and tell her she had better stop or she would be sorry. She continued playing this game for a few minutes.

I told her, “If you do that one more time I’ll may you pay!” She waited for a couple of minutes then did it again. I sat up on my knees with her legs bent up to her behind, in a mock hogtie, and said, “I told you that you were going to get it if you didn’t stop!” I began tickling her on her sides and the bottoms of her feet alternating as she tried to stop me. She was wiggling around trying to get away and asking for me to stop. I asked her the same question I had asked her in the past:

“Would you rather be tickled or tied up?”

The answer was always the same for her:

“I’d rather you tickle me than tie me up.” So I continued the tickling for another few minutes.

I knew it was only a matter of time since she is soooo ticklish. “Okay, okay you can tie me up. Just stop tickling me.” Those words were always music to my ears. I hopped off of her and told her:

“Don’t move. I’ll be right back. If you move so much as an inch, I will tie you up then start tickling you again.”

Usually she did just what I said, so I would only tie her up, sometimes only her feet. But tonight she must have been feeling a little devilish. When I returned to her bedroom she was gone. I went looking through the house calling for her:

“If you come on out and take your punishment like a good girl I’ll make it real quick. But if I have to find you, you will pay dearly.”

I walked around and looked in closets, under beds, in the showers, but I could not find her. I finally heard her make a noise and found her hiding in their rather large kitchen pantry.

“I’ll bet you think your pretty clever. Well we will see if you still feel that way after tonight. Now get on your knees.”

I made her get on her knees so she could not run away again. Then I tied her hands behind her back, cinching it, tied her elbows the same way pulling them as close as I could without it being painful. I helped her to her feet and walked her to the bedroom. Before she sat down I wrapped more rope around her arms from her shoulders to her waist to make escape impossible. I helped her sit on the bed, then I blindfolded her, stuffed her mouth, and cleave gagged her with bandannas. Next I helped her lie down on her stomach with her head at the foot of the bed so I could sit up with her feet in my lap. I loosely tied her ankles together and told her:

“Take your socks off!”

She wiggled her feet back and forth trying to get her toes under the edge of the socks to push them off. Then she tried to reach them with her hands but she could not come close to reaching them. She laid her feet back in my lap as if giving up. I asked her:

“Do you think you could do it if your ankles were untied?”

She nodded yes, so I untied her ankles. Slowly she worked the first sock off her left foot, then it was easier for her to push the other sock off with her bare foot. She laid her feet back into my lap as if to say “Let’s get started,” knowing that they were about to get “the treatment.” Her feet were cold from standing on the kitchen floor, but I had ideas as to how to warm them. I took a long rope and started wrapping it round her ankles, cinching it then doing the same with the soles of her feet. I tested the bonds by running my fingers down both soles. She jerked her feet up and struggled for a moment then laid her bound feet back in my lap knowing resistance was futile. I moved up to her knees and took a shorter rope and tied the loosely together, but cinching just the same.

She did just as I told her. She must have figured, “Where else am I going to go like this?” I got behind her and tied a rope end to her ankle cinch. Next I put some of my weight on her legs to force them closer to her behind. I threaded the rope through the one tying her wrists, tied it off, then threaded it through the cinch on her soles and pulled it to the rope tying her elbows. She let out a little grunt as I tied it off. She tried moving a little, but the hogtie kept her from doing so. All she could do was wiggle her toes.

“Do know what is next?” I whispered in her ear.

Slowly she nodded her head yes while continuing to wiggle her toes and breathing hard.

“Oh, I doubt you could guess what is coming up next for you.”

I returned to her knees and used a short rope, about 12” long, tied it to the cinch, then made a loop at the other end. Next I took shoelaces and tied them snug at the base of her big toes, then just at the base of her toenails and pulled them tight down to the loop coming from her knees. She grunted louder this time shaking her head “NO” as her big toes were being pulled backwards, arching her foot back allowing her no movement at all. As a safe measure, I tied the rest of her toes in the same manner, pulling enough tension to on them to restrict any movement.

“I hope you’ve learned your lesson about running away from me and hiding,” I said.

She nodded her head vigorously.

“There is one more detail that we have not taken care of yet. You know what that is, don’t you.”

Again she slowly nodded her head yes, this time, however, she could not even wiggle her toes. It was now time for the assault. I started with her cold feet and toes. Then I moved to her sides and wherever else I could reach. She was squealing and breathing hard through her gag and trying to find some weakness in her bondage so she could stop my fingers from this vicious attack. Her fingers were wiggling, she was trying to roll around, but my rope work turned out to be too much for her. I did not tickle her too long fearing she may get choked, but I did leave her tied up like this for almost an hour. I did take the gag out so she could drink something and her blindfold off so she could watch TV. I would tickle her feet from time to time just to remind her of her predicament. I let her out of her tight hogtie first, but left her toes tied. This kept her feet in my lap with her arches still vulnerable. Her feet, toes and knees were the last things I untied. I would steal a tickle here and there. When it was all over I asked if she was mad.

“No. I asked for it. I just did not know I could be immobilized like that. Next time you tell me not to move I won’t move an inch. . . .unless you want me to.”
Last edited by ishfet 2 months ago, edited 1 time in total.
Top