Stories that have a significant measure of truth to them should go here.
Post Reply Previous topicNext topic
1 post • Page 1 of 1 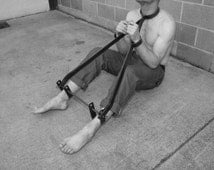 I fell in love with the idea of being locked inside the metal triangle of a Cravat. I had seen one at the London Dungeon, some poor soul being inside one for God knows how long... Defecating, peeing, and having his bones remolded to become a hunchback, not even for days for weeks but perhaps for months. Unbelievable pain; it would have been never-ending.

Of course I had no desire to experience such an extreme. But I wanted to experience the cravat! So I sent away for it, several hundred dollars, just like the one in the picture. (BTW, he has the ankle holders on upside down.) And because the wrist holes were a bit too large, I could wriggle my hands into them and then put my hands into handcuffs, close the shackles and voila, I was locked in.

Then there were my ankles, which I had to lock up first. I found I could slide on the ankle restraints, then, having cut a 1" diameter tube the appropriate length for the distance between my ankles to keep the ankles holders apart on the ankle bar, I was then able to twist myself to attach a lock through the hole at the end of the ankle bar to lock myself in.

OK, so, one... lock in the ankles, two... buckle on a hood or blindfold, then three... slide wrists into the wrist holes and attach the handcuffs.

The first time that I did this, it was for perhaps 1/2 an hour or an hour. then I constructed a timer that would only release the key to the handcuffs after a specified period. I went for 90 minutes, then two hours, then three hours.

Then I tried it wearing a hood, from which I could see nothing. Then I tried adding disconcerting sound effects from speakers in the hood.

Yeah, unfortunately were talking self bondage. Who's going to play with me?

Well that came in time. There was a girlfriend and then later there was a woman I married. Both loved me, but I didn't experience them as really engaged in my excitement; they seemed to take not an ounce of sadistic pleasure, but seemed more like they were trying to take care of what I wanted.

I still have the cravat... and I am hoping that one day I discover someone who can appreciate it as much as I do.